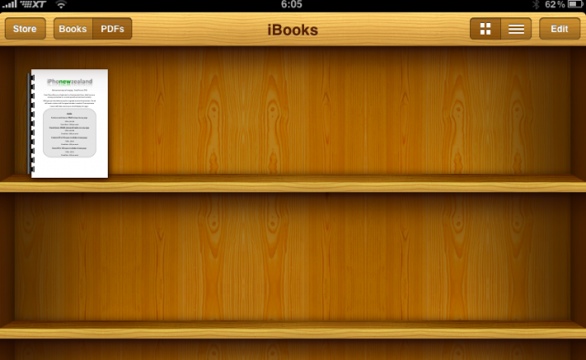 Recently some people I believe at 9to5Mac we getting curious and emailed Steve Jobs and they basically said, “We love using iBooks to house all of our PDF’s and we thought it would be amazing to have the PDF’s in folders to stay organized.” and Steve replied “coming.”

“From looking at these Apple documents it appears that collections will be a button you tap on the iBooks toolbar that brings up a list of all your collections but it also appears there will be ‘collections’ actually sitting on your bookshelf.

Also, you will now be able to take PDF’s you have stored in iBooks and e-mail them off to whomever you would like. Printing PDF’s via AirPrint will also come in this update which should be handy for many users. Apple will also be very clear to say that the printing and e-mailing of actual books is not happening.”

So basically this means that Apple wouldn’t have to release a software update to have folders in iBooks. Since iBooks is an app in the App Store all we would need is just a small app update.

Let me know what you think in the comments below.