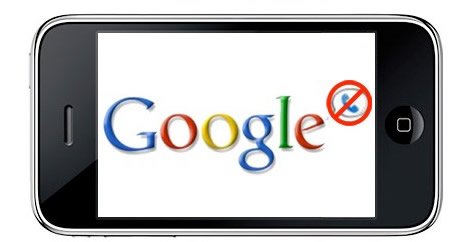 The long-awaited Google Voice application for the iPhone has been officially shot down by Apple.

There were a scattering of reports on Monday, and then a Google spokesperson confirmed it: “Apple did not approve the Google Voice application we submitted six weeks ago to the Apple App Store. We will continue to work to bring our services to iPhone users–for example, by taking advantage of advances in mobile browsers.”

In addition, all third-party applications that use Google Voice have been pulled by Apple, according to a report in TechCrunch. The developer of one of those apps, GV Mobile, says he was told the decision came from Apple because his app “duplicates features that come with the iPhone.”

It’s unclear why Apple is refusing the app to be sold in its store, though there are hints that it may have come at the behest of AT&T, the exclusive carrier for the iPhone in the U.S. Google Voice is a free application that lets users assign a single number to ring their home, work, and cell phones, and also get voice mail as text transcriptions. Google Voice has been described by some as an “end run” around wireless carriers because it allows for free texts, but users do still use minutes on their AT&T phone plan.

A source reports that it was in fact AT&T’s request that Apple block the application, but points out that Apple too has good reason to reject it: “Google Voice is a mobile phone service provided by the maker of one of the biggest competitors to the iPhone OS (Android). What if Google Voice were instead Microsoft Voice?”

It’s also by now well established that the application approvalprocess for Apple’s App Store can be confusing and frustrating forindividual developers, and now even for giants of the technology industry. Just last week, another dust-up occurred with Google and the iPhone, when Apple refused to approve Google’s Latitude for the iPhone unless it was designed as Web-based app.