Apple has just announced who downloaded the 10 billionth iPhone application and what it was. They stated:

With more than 160 million iPhones, iPod Touch, and iPad users worldwide. The 10 billionth app downloaded, Paper Glider, was purchased by Gail Davis of Orpington, Kent, UK. As the winner of the App Store Countdown to 10 Billion Apps, Gail Davis will receive a $10,000 iTunes Gift Card.

It’s amazing that after only a little more than 2 years, Apple has already sold 10 billion iPhone, iPod touch, and iPad applications. Congratulations to Gail Davis most likely won’t need to buy anything from iTunes again.

Now that more and more people are switching from PC to Mac more and more people are losing their iTunes libraries. CopyTrans TuneSwift from WindSolutions solves this problem easily and efficiently. The program has an easy to follow, simple UI from which you can choose to backup, restore, or transfer your iTunes library and all you need is an external hard drive or flash drive. This video will demonstrate how the program works:

Well, this is the “big” announcement that we were waiting for. On Tuesday, November 16, 2010 Apple announced that The Beatles are now on iTunes. You can download your favorite songs from all 13 of The Beatles’ original studio albums or download the complete box set HERE.

Unfortunately, iOS 4.2 has not yet been released and most likely won’t until around the 24th of November. Of course, this does come as a disappointment to many of us but to those who love The Beatles and downloading music via iTunes, I suppose it’s a joyous day for them. Stay tuned to TechGeec.com for all of your most needed updates. 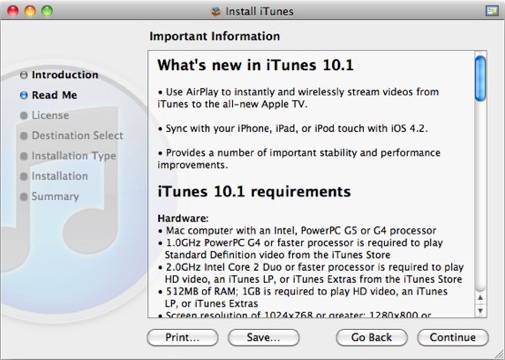 Apple released today iTunes 10.1. This introduces AirPlay and iOS 4.2 for the iPad, iPhone, and iPod Touch. (NOTE: iOS 4.2 is not yet out, there is just support for it.)

With iTunes 10.1, you can wirelessly stream videos from iTunes on your computer to Apple TV. This also provides important stability and performance improvements.

I just need iOS 4.2 and then my life is complete!

CopyTrans Manager is a FREE iPod/iPhone/iPad manager which will allow the managment of all media located on the preferred device. You can do all the features with it that you can do with iTunes, except CTM is faster, lighter, and there’s no need for any installation. It wouldn’t hurt, however, if the UI was updated.

CopyTrans Manager, by WindSolutions, is a FREE iTunes replacement for Microsoft Windows. It’s much faster and lighter (uses less memory) than iTunes, however, it is also much simpler. It does, though, still have all of the important features that iTunes has – adding media to your device, edit song tags, album artwork, create/manage playlists, play music, etc.

There are many great features that CopyTrans Manager has, however, there are also some (not too bad) down sides to it. The newest version, v0.919, is now compatible with both iOS 4 as well with the iPhone 4 which is great considering the fact that already 3 million+ people now own the iPhone 4. The Manager is great for (very) simple use. There’s no fancy buttons or menus with endless options to go through which makes it extremely easy for non-computer savvy people to use (like my mother :D). It does offer some other benefits, however, like it’s usage of less memory than iTunes (not to mention there’s no installation needed).

Now this is not a complete iTunes replacement. You can’t buy music from it and your device must be plugged in for you to use it. The reason why you need to plug in your device, though, is because it’s an iPod manager, not an iTunes manager. This program isn’t meant for you to just open it up and listen music from it like you would with iTunes. It’s specifically meant to manage the media that’s stored on your devices.

Also what I found, was that I had to run the program as an administrator (right click the icon and select “Run as Administrator”). This is most likely due to the fact that I’m running on a 64-bit machine. I didn’t like the UI (user interface) that much just because it seemed a bit out-dated (don’t let the UI reflect upon how the program performs). In the next version, I’d like to see a new UI, one that possibly resembles and works with Windows Aero theme that is present in both Vista and 7. Other than that, though, the program works just as advertised – fantastically, but be sure not to mistake it for an iTunes manager, it’s an iPod manager (two completely different things). You can download it for free from www.CopyTrans.net.

Hey guys, so we have a new giveaway for you all. This time it’s an iPhone application called Elasticr. It’s a really fun game and it’s a lot more addicting than it looks and we can give away 5 promo codes for the app.

To enter this giveaway, all you have to do is follow me on Twitter, @connerowen, and then in one week from now (August 15, 2010) I will send the winners a Direct Message with the promo code. In order for me to send a Direct Message, you have to be following me.

If you have any questions or concerns, feel free to leave a comment or email be at conner@techgeec.com.

TheiPhoneFix, developer of the iPhone/iPod touch and iPad game, Defend Your Universe, was kind enough to provide TechGeec with three (3) promo codes to get his application, Defend Your Universe, for free. This giveaway will only be open for one week. After that, the developer will release a new update for the application which will provide better graphics. We will have more promo codes to give away once the update is released as these three promo codes that we currently have can only be used to redeem the current version of the app.

Defend Your Universe Description: Earth’s in trouble, what will you do? do you have the skills to keep it from falling into the hands of aliens????? In Defend Your Universe your job is to destroy enemy ships that are headed towards Earth, or at least for as long as you can. But, you also have defenses, as time goes by you will build up shields to protect you against aliens

All you have to do in this game is tap the ship to destroy it, or as time goes by, you may find swiping works just as well, what ever your method see how long you can last while trying to defend your planet in Defend Your Universe.

How to Enter the Giveaway:

That’s it! That’s all you have to do to enter the giveaway – just leave a comment. In one week, on August 5, 2010, we’ll announce the winner here on TechGeec in a new post. The three winners will be listed there and we will contact the winners and give them a promo code for Defend Your Universe.