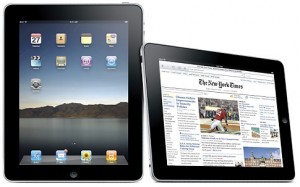 Apple Inc. began selling its much-anticipated iPadon Saturday, drawing eager customers intent on being among the first owners of a tablet-style device that the company is hoping to convince more people they actually need.

Some of these initial iPad buyers were drawn by the ability to read electronic books, watch video and run a myriad of useful or fun applications, including Scrabble.

Ray Majewski came to an Apple Store in Freehold with his 10-year-old daughter, Julia, partly as a reward for getting straight A’s in school. He decided on an iPad over Amazon.com Inc.’s Kindle electronic-book reader.

“I like the electronic books, and my daughter is really getting into them as well,” Majewski said. “I was thinking of getting a Kindle but then said to myself, `Why not get an iPad because I can get so much more from that than just reading books.’”

The iPad is essentially a much larger version of Apple’s popular iPhone, without the calling capabilities. The new device is a half-inch thick, weighs 1.5 pounds and has a touch screen that measures 9.7 inches on the diagonal — nearly three times the iPhone’s. Also like the iPhone, it has no physical keyboard, but sports an accelerometer, which lets gamers tilt the device to control what’s happening on the screen.

For now, Apple is selling versions of the iPad that can only connect to the Internet using Wi-Fi. Those models start at $499. Versions that also have a cellular data connection will be available by the end of the month. They will cost $130 more, with the most expensive at $829.

Scores of people lined up outside many Apple Stores and Best Buy outlets well before the iPads went on sale. Apple’s store on New York’s Fifth Avenue had a party-like atmosphere, with employees cheering and clapping as customers entered and left.

Although Apple is adept at generating frenetic buzz for not-yet-released products, it may have to work extra hard once the initial iPad excitement settles. Many companies have tried to sell tablet computers before, but none have caught on with mainstream consumers.

Apple will need to persuade people who may already have smart phones, laptops, set-top boxes and home broadband connections to buy yet another Internet-capable device with many of the same functions.

And while early adopters who pre-ordered an iPad in recent weeks gush about all the ways they hope to use the iPad — casual Web searches on the couch, sharing photo albums with friends, reading books — skeptics point to all the ways the iPad comes up short.

They argue the on-screen keyboard is hard to use and complain that it lacks a camera and ports for media storage cards and USB devices such as printers. They also bemoan the fact that the iPad can’t play Flash video, which means many Web sites with embedded video clips will look broken to Web surfers using Apple’s Safari browser. And the iPad can’t run more than one program at a time, which even fans hope will change one day soon.

One Response to Apple Releases the iPad Finally