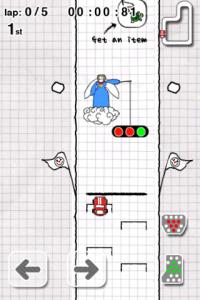 Doodle games, with graphics that appear to have been hand drawn, are hot. Lima Sky’s Doodle Jump, for example, is currently sitting in third place in the best-selling apps column.

Among the latest of these games is  Doodle Kart from j2sighte, a novel top-down racing game that pits cleverly crafted racers against each other on a graph paper background. j2sighte says Doodle Kart was inspired  by Sauce Digital’s Nano Rally, a similar game also with hand-drawn graphics.

After choosing one of three cars, you can select settings for speed, acceleration, handling, weight and items, actually weapons, such as pencils and rockets and other power ups. You control the car using a gas and brake pedals in the lower right corner.

You have two options for steering your car: touch and tilt. Touch is accomplished using right/left arrows. If you opt for Doodle Kart’s tilt control  you’ll find there are three settings (low, medium and high). I found maneuvering the course using tilt control to be difficult, so I decided to stick with the right/left arrow touch controls.

I don’t know, maybe it’s just me, but I initially found the car difficult to control, even on it’s lowest settings. It took a few hours of playing before I started to feel comfortable. I finally settled on setting my speed and acceleration to about the halfway mark and handling cranked all the way up. You’ll want to experiment with these settings because they make quite a bit of difference.

This app also has leader boards, forums, chat and other functions derived from the increasingly popular OpenFeint social networking platform.