There has been much news lately about an upcoming Verizon Wireless iPhone. Talks of the Verizon iPhone have been circulating since last year, if not longer, but it seems that this year they’re a bit different. The recent rumors/announcements have been more in depth and what Ivan Seidenberg, Verizon CEO, said about wanting Verizon to carry the new iPhone “4G” makes them seem much, much more convincing. 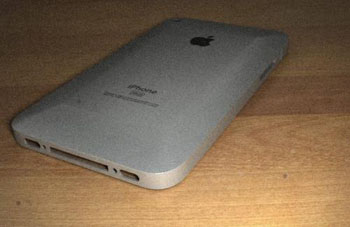 The picture to the right is a newly released photo of what is being called the new “Verizon iPhone”. As you can see, the back (probably) immediately reminds you of the iPad’s aluminum back. Also, the iPhone in the image also looks to be of a slightly different size than the current iPhone (some rumors have said that the new iPhone 4G will have a larger screen). The only thing that looks a bit “sketchy” as of now, is the quality of the image. The fuzziness could easily be hiding some “evidence” of fantastic PhotoShop-ing skills. It’s up to you, the reader, to decide whether or not this image is viable.

The only reason why Apple wouldn’t make a Verizon iPhone, would probably be that either their exclusivity contract with AT&T still hasn’t expired or that AT&T will pay them off. Verizon Wireless is currently the largest wireless provider in the United States. If Apple doesn’t release the new iPhone on Verizon, it will be an incredibly ignorant notion.