Let me start by saying that if you’ve given up on Office for Mac after the disappointment of 2008, you should have another look at the latest offering. I feel like the Mac department over at Microsoft is finally getting the support and resources it needs from corporate to give its products a fighting chance alongside Apple’s own offerings.

General impressions aside, here’s what you need to know about the new PowerPoint.

More Windows and More Mac, All at Once

Amazingly, Microsoft managed to make the new PowerPoint interface feel more like its Windows-based twin, while also changing the design so that it looks more at home on the Mac desktop. One of the features that helped the new design is the inclusion of the ribbon. Yes, it’s a controversial feature, and many Windows users don’t like it, but I’ve grown accustomed to using it, and I welcome its inclusion on the Mac side of things.

The ribbon, for those who haven’t tried any recent editions of Office for Windows, resides at the top of your interface underneath the tool bar. Commands and tools are organized by sections, like “Home,” “Theme,” “Charts,” “Slide Show,” etc. If you’re used to hunting around in menus for Office commands, you probably won’t like them, but for those new to the suite, it’s a much more logical means of organization.

Office 2011′s ribbon has all the same content as the Windows version, but it looks decidedly Mac, as you can see from the screenshots, so there’s no confusing what environment you’re working in. You can easily hide or show the ribbon, so it doesn’t get in the way of the presentation you’re working on. You can also customize it by rearranging tabs and changing commands, so there’s really no reason to dislike it unless you just prefer things not change.

It’s hard for me to even convey how frustrating it is to manipulate the order of objects in past versions of PowerPoint, especially in presentations and slides where you’ve got a lot going on. I used to work at a company where we used PowerPoint as print publishing software, so that should give you some idea of how complicated layouts could get. 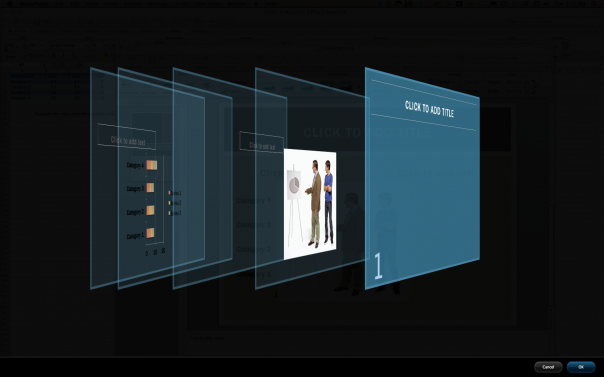 The new Reorder Objects tool in PowerPoint 2011 allows you to easily manipulate even the most complicated slides pretty easily. It looks like the new Windows 7 Flip 3D feature, fills your whole screen, and lets you click and drag layers to rearrange. No more hoping this is the last time you have to click “Send Backward.”

PowerPoint 2011 approaches the simplicity Keynote has in terms of adding media. You can use the Media Browser to drop photos, music and video in from various sources, including your iTunes, iPhoto and iMovie libraries. Even Aperture showed up in the source menu in my tests.

You can also edit stuff more easily — and with more options — from within the app. Doing basic retouching on photos is quite easy, and about on par with what you can do in iPhoto, only without having to leave the app. PowerPoint also has some other neat image editing functions, like the Remove Background tool I used to cut out Justin Long and John Hodgman in the screenshot below in about 30 seconds. 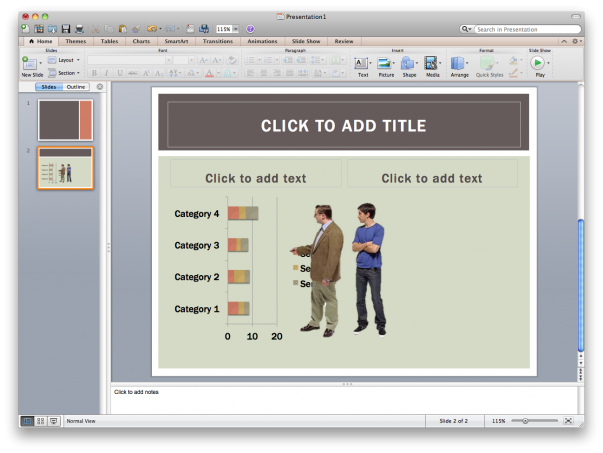 Working together with distributed teams is easier with the new PowerPoint, since you can collaborate wirelessly in real time, and communicate with each other via Live Messenger or Communicator. Plus, you can access and make changes to your presentations on the go with the PowerPoint web app. Finally, publishing your slide show to the web so that it’s viewable by others is a snap, and your audience doesn’t need to have the program to take part.

There are still some limitations to using PowerPoint 2011 on the Mac. You can’t access your presentations on the web from your iPhone’s or iPad’s browser, for example, and I still think presentations made in Keynote might look a little better, too.

Overall, that’s about all I have to say against PowerPoint 2011. Earlier today on Twitter I asked how many still used Office for Mac in some capacity, and was surprised to find that a lot of you still do. That Microsoft is delivering software at this level is great news for those users. If I was still in the business of regularly making presentations, this is definitely the tool I’d use to get the job done. In fact, it may just inspire me to include a slideshow the next time I give a talk.