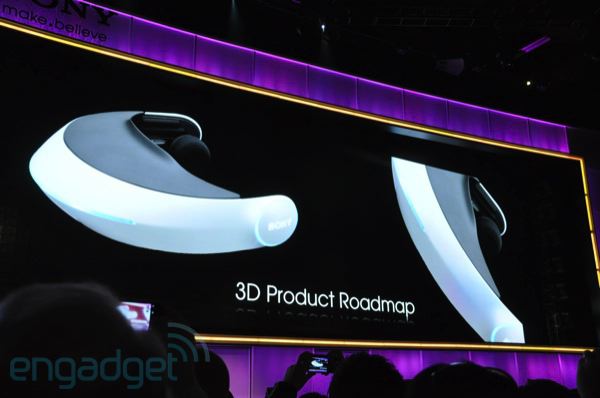 One of the hottest topics at tonight’s Sony press conference on CES 2011 was their prototype 3D head-mounted display. The headgear has two 1280 x 720 OLED displays and integrated simulated 5.1 surround sound. The design of the product is unbelievable, however. It wraps around your eyes and ears and has sleek, cool blue LED accents.

There are already some issues, though, mainly because it’s still a prototype. One of which is that the user currently has to hold the headset up to their face like binoculars because it is incapable of resting on one’s face like regular glasses. Sources claim the 3D is subtle yet very well executed so long as the user holds it at the perfect angle.

In terms of the noise quality, it was difficult to detect the quality due to the noise in Sony’s booth, but it did seem to be good enough. If Sony is able to successfully produce these displays, make them fairly inexpensive ($100-$200), and are able to persuade the public that wearing a head-mounted display gives the best quality and user experience, they will definitely have a winner.

What do you think about this product? The aesthetics are amazing, user experience is just alright, as of now. Again it’s still a prototype so there’s a chance it might not ever me produced.