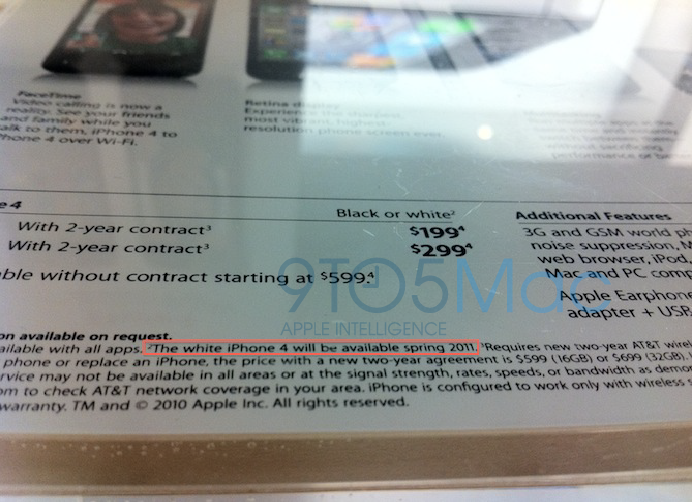 Some new signs popping up in various Apple stores around the United States confirm that the white iPhone 4 will be available in Spring of 2011 as seen in the image above. 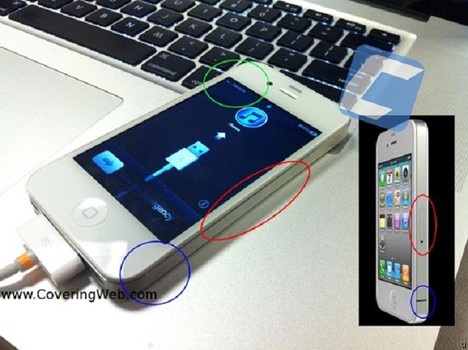 Above is an image of the almost non-fiction “Verizon iPhone” posted by ÜberGizmo. You can see it’s a white iPhone 4 with no SIM card slot on the right side, no area for the antenna, and it’s displaying the Verizon Carrier setting. This would be, by no means, difficult to Photoshop. Third party companies already sell white iPhone 4 parts, the phone could be jailbroken making the carrier display “Verizon”, and Photoshop could be used to remove the SIM card slot and antenna.

We’ll see what’s to come in the months ahead. Leave your comments below of what you think about the Verizon iPhone. Is it a myth, will it come early next year, or will it never come at all? Fill us in on what you’re thinking.

Apple may have canceled the white iPhone 4 altogether, according to a new report from BGR.

According to a previous source of ours, we have been told that Apple in fact has no plans to release the white model iPhone 4. Our source hypothesizes another “delay” communicated around March leading us into an iPhone 5 release time-frame in June / July. Something interesting is that manufacturing sources our contact has are keeping quiet on the matter, not confirming that this was in fact a manufacturing issue at this point, but that there might be something else going on behind the scenes.

Apple announced yesterday that the device would not be available until spring 2011.

I’m sorry that I have to resort to this, however, due to time constraints, the following article is provided by Boy Genius Report.

“Now stop me if you’ve seen this.” And so Steve Jobs announced the iPhone 4. Featuring stainless steel banding around the sides and a glass front, the iPhone 4’s “closest kin is a beautiful old camera.” It’s 24% thinner than the iPhone 3GS at 9.3mm thick, which Apple claims makes it the smallest smartphone on the planet or “a quarter thinner than something you didn’t think could get any thinner.”  The three stainless steel bands surrounding the device that look very un-Apple actually serve two purposes: they add to the structural integrity of the device and double as antenna boosters. Smart.

The iPhone 4 has a 3.5″ display that has 78% the pixels of the iPad. With a resolution of 960×640 — or 4x the resolution of the first three iPhones — the iPhone 4 has four pixels where the other devices only had space for one for a total of 326 pixels per inch. Apple calls this “Retina Display” technology and says it translates to images and text so incredibly sharp that you’ll feel like you’re looking at a “finely printed book” instead of a mobile display. The display technology also means that apps will not have to be rescaled, so everything currently in the App Store will The display also has a 800:1 contrast ratio.

Moving on the the processor. Yes, indeedy, the iPhone 4 is powered by an Apple-designed A4 SoC. Apart from providing raw power, the A4 also sips juice from the battery as opposed to gulping it. This means the iPhone 4 is good for 7 hours of 3G talktime, 6 hours of browsing over 3G, 10 hours of browsing over Wi-Fi, 10 hours of video, 40 hours of music and 300 hours of standby. As expected, 802.11n Wi-Fi is included as is a quad-band HSDPA radio capable of 7.2Mbps down and 5.8Mbps up. The iPhone 4 also introduces a dual-mic system for noise cancellation and a gyroscope which combined with the accelerometer allow for 6-axis motion sensing.

The iPhone 4’s main camera weighs in at 5 megapixels. What makes it special, according to Apple, is its backside illuminated sensor. This allows more photons to bombard the sensor resulting in better low-light photos. A sole LED flash straddles the camera sensor. Digital zoom tops out at 5x, while video capture has been stepped up to shoot 720p at 30fps. The LED flash is fully functional when capturing videos.

Not included with iPhone 4 but to be available in the App Store for $4.99 is iMovie. iMovie for the iPhone is pretty much what you’d expect — that is if you were expecting a feature-rich mobile movie editing application that’s capable of manhandling 720p videos. You can rearrange clips by dragging them about; add in photos, transitions, titles, and music; and use geolocation so you’ll have no excuses for forgetting exactly where you were when you shot the film.

And then there’s the front-facing camera. It runs the open application FaceTime. Apple is currently working with wireless providers to bring forth bonafide 3G video calls, but as far as 2010 is concerned you’re stuck with Wi-Fi. If for some reason you don’t want the person you’re calling to see your mug — or perhaps you just want them to see what you’re looking at — you can switch from the front-facing camera to the 5MP camera on the back.

So when can you get the iPhone 4? If you live in the US, UK, Germany, France or Japan you’ll be able to pre-order it on June 15th and pick it up on the 24th. In the US, AT&T will sell the 16GB model for $199 and the 32GB model for $299 (both assuming a 2-year contract). At an unspecified time in July, 18 other countries — Canada included — will get the iPhone. Oh and how could we forget? The iPhone 4 will be available in both black and white.

Well, that’s pretty much everything new about the iPhone 4. Again, I apologize for not having the appropriate amount of time to write my own article, however, other things must be done before updating the site. Many US citizens with Verizon are extremely disappointed (as am I) that the new iPhone will only be available for AT&T. As previously stated, AT&T’s exclusivity contract expires in 2012 which means we will most likely not see a Verizon iPhone until the 6th generation is unveiled in 2012.

For pictures and more information on the iPhone 4, please click HERE.

Leave a comment below expressing your thoughts on Apple’s latest and greatest device.

CaseCrown‘s MOD Shell could quite possibly be the best case for the iPod Touch 2G/3G [at an affordable cost - $19.99 ($12.21 as of December 28, 2009)]. The MOD Shell is available in Red/Black and White/Black. It’s design blows other comparative cases out of the water along with it’s affordable price.

The case is made from a premium grade synthetic leather which appeals to a vast majority of animal lovers. The faux leather not only looks like real leather, but it also smells like real leather which many companies cannot seem to be able to do. On the back of the case is a single, thick fiber woven stripe which seems to give the case a sporty design. The only suggestion I could give to make this case the best it can be, would be to make the thread outlining the stripe red on the red/black version. On the white/black version of the case, the thread outlining the white fiber woven stripe is white which accents the stripe beautifully.

The upper part of the left side of the case is left open to expose the volume rockers, the bottom is open to expose the 30-pin dock connector as well as the headphone jack, and the top is, of course, left open so that you can slide your device in and out. What I really enjoy, though, about the case is that the top does not go too high as to make it difficult to press the sleep/power button, contrary to DSstyle’s Twill Series. Finally, the small logo on the front does not take away from the chic design of the case. Many cases have the company’s name/logo printed too large. CaseCrown’s logo on the MOD Shell is just the right size.

The MOD Shell by CaseCrown is by far one of the best cases around and at an affordable price. You can view the MOD Shell for the iPod Touch HERE or the iPhone version HERE.

A Note From the Editors of TechGeec: Though all products and services reviewed by TechGeec are “final,” many companies now make changes to their offerings after publication of our reviews, which may or may not be reflected above.