*Use the coupon code “MerryXmas” on BudgetGadgets.com until December 31, 2009 for 8% off  store-wide!

Budget Gadgets is an amazing website with iPhone and iPod Touch accessories (all of which are unbelievably cheap). Their Stylus Touch Pen (price: $2.33) was shipped to me for review. The stylus works just as any other stylus would, however, it works with capacitive touch screens (such as the iPhone, iPod Touch, and Zune HD). This stylus works because it is conductive and when it is brought close to the screen of the device it changes the local electrostatic field (for more information, click HERE).

The stylus has a nice design. When you order the stylus’s you have a choice between the black and the chrome. Each stylus also has a clip on the top so that you can go ahead and clip it on to a shirt pocket or other type of pocket. I have noticed, though, that with both stylus’s, they tend to occasionally attract finger prints.

I find that using a stylus can benefit many people (primarily those with large fingers). It’s easier to use the stylus than your finger because it has a smaller point so you know exactly what/where you are selecting. Notwithstanding, a fantastic add on that could have been included, would have been a clip-on type accessory that could clip on to the back of the device to hold the stylus so that you are not forced to keep it in a pocket. To grasp all of the points in this review better, feel free to watch the short video review below.

A Note From the Editors of TechGeec: Though all products and services reviewed by TechGeec are “final,” many companies now make changes to their offerings after publication of our reviews, which may or may not be reflected above.

The iPhone 3.0.1 update was recently released. If you want to jailbreak any iPhone running on  iPhone OS 3.0.1, you must use redsn0w 0.8. Do not update to 3.0.1 if you are using an iPod Touch, there is no need to. This post will show a step-by-step tutorial on how to jailbreak iPhone 3.0.1 with redsn0w.

First you must download redsn0w for Windows, Mac, or Linux from here.

1. Download the iPhone OS 3.0 IPSW file for your device and save it to your desktop. Here are the file names for each device, make sure you have the right one:

4. Locate your device’s IPSW file that you downloaded in step 1 and click Open.

5. The redsn0w window will have the “IPSW successfully identified” message. Click the Next button to continue.

6. redsn0w will ask you to “Please select which options you would like to have“. Make sure the Install Cydia box has a check mark and then click Next.

8. redsn0w will now ask you to connect your device in DFU mode, you must do this properly to jailbreak iPhone 3.0.1.

9. Once your device has successfully entered DFU Mode, redsn0w will show the following message: “Please wait while your device is being jailbroken. Waiting for reboot.” Your device should reboot after this. If redsn0w is stuck on Waiting to Reboot, unplug your USB cable quickly and plug it back in. The jailbreaking process should continue after tha.

10. Once your device has rebooted redsn0w will start uploading the RAMDisk and kernel.

11. After everything has been successfully uploaded to your device, redsn0w will have; the “Done!” message. Your device will now reboot and you should see the Cydia app on your SpringBoard. Your iPhone is now jailbroken!

Yesterday, Apple released the 3.0.1 firmware update for iPhones and iPod Touches. It is advised that if you’re on an iPod Touch do not update considering the only difference is the SMS vulnerability fix. If you’re on an iPhone and are worried about your security, you should update. If not, don’t worry about it. 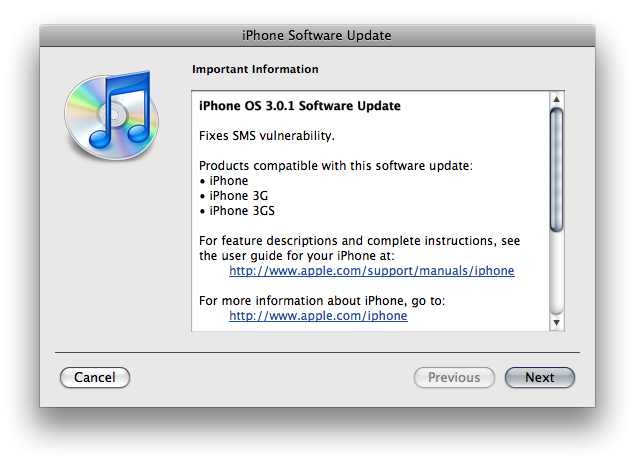